Well the first proper day stated a little early, after a long flight and my first experience at drinking that much rum. So i was a little groggy to say the least when my alarm started blaring out. I soon realised it was a good thing and soon got my ass ready, after shooting the intro to a video i headed down to begin the 2 hour journey to Pinar Del Rio.

It was good too see the fertile lands of Cuba & some of its mountains(which excited the climber/hiker in me), after we finally got out of Havana. The combination of pot holes and our awesome driver, the journey kept us awake/alert.

We soon began to hit the tobacco growing areas, it started as small patches of tobacco, the slightly larger areas and eventually we hit the town/city. Its was a little different to Havana as you would expect, not tourists or bar/restaurants everywhere. After a little driving around, i get the impression the driver was lost, but we finally hit the Hoyo De Monterrey plantation. At that time of year the harvest was well in swing so we saw a lot of the plants that had a few priming’s of the leafs removed. 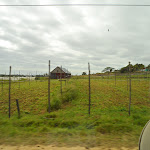 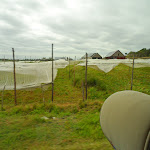 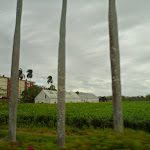 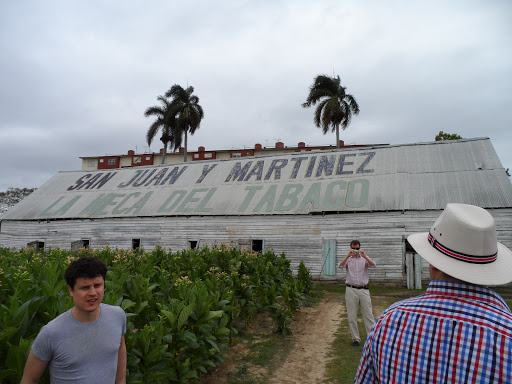 Most of the wrapper leafs had already been harvested, which left only the sun grown leafs growing in the fields. The Wrappers are grown under shade to produce thinner and larger leafs, ideal for job. Some areas of the fields are also used for seed production, where the flowers are left. All plants that will have the tobacco used for cigars, have all of the flowers and smaller stem leafs removed. This helps to send all of the nutrients to the leafs and create a much richer and flavoursome smoke.

The leafs are only picked when they are ready and this happens in primings(leafs are removed starting at this base in pairs). By doing it in this way the lower leafs (Volado) are lighter, bigger and thinner.
The middle leafs (Seco) are little stronger & thicker.
Leaving the upper leafs (Ligero) which are stronger and much thicker.
Some plants produce the Medio Tiempo , which is top two leafs. This tobacco is very rich and strong, but only a handful of plants produce these.

Once the tobacco has been picked it is taken to the curing barns where it strung together, with a thread through the main stems. About 100 leafs are then placed on poles, which start there journey from the base from the base of the barn, moving to the top. This slow process allows the leafs to dry and go from green to brown. By this point the leafs have begun there transformation &  are bundled together(based on leaf type) in bales before being sent to the Escogida (Sorting house).

While at the plantation the farmers gave us a little demonstration of the traditional way of rolling a Cuban “rustic” cigar. These cigars do not go through the same selection, quality control or finishing process the exported Habanos do. These smoked a little rough and ready, but gave us chance to experience the sort of cigar Christopher Columbus would have been greeted with.

My Video of the Plantation, Curing Barn and Farmers Rolling

After the visit to the Hoyo de Monterrey plantation and curing barns we headed to the Escogida (Sorting House). Nestled away in Pinar del Rio, sat a series of stone building up a dirt road. The leaves are brought in and stacked into piles under cloth covers to allow fermentation to take place. During this process the leaf changes, the colours darken, ammonia and nicotine dissipate. The process happens much like a compost heap, the leafs generate heat and residual moisture helps fermentation take hold. This first fermentation takes only 30 days for the thicker leafs and 25 for thinner ones and wrappers. After this first fermentation the leafs are ready to be sorted.

The wrappers go through the most thorough inspection, any that have holes or are too thick get rejected. Suitable wrappers are graded into size and colour, before being wrapped into bales for ageing. Its hard to believe but over 50 different classification’s exist for wrappers. Any wrappers that dont make the grade are rejected and used for either cigarettes, non Habanos cigars (only Habanos cigars are exported) or exported for use in Cigars/Pipe Tobacco.

The filler and binder leaves go through various gradings, they are first graded into strength (Ligero, Seco & Valado) as well as size. Once the leafs have been graded they are tied up in bunches called hands. Now its time for the tobacco to visit the Despalillo (Stripping House).

Once the leaves enter the Despalillo they are a little dry and need to remoistened before the second Fermentation can take place. The hands of tobacco are placed into shallow but long troughs, a very fine spray of water is applied to the leafs. After the leafs have had a light wash, they are passed to the Despalillaoras who remove the lower half of the stem. All the while a final check on the classification is conducted and any unsuitable leafs are removed.

The stripped leafs are stacked into high piles ready for the second fermentation. The added moisture allows the tobacco to ferment for longer periods. Ligero leafs for 90 days, Seco for 60 and the Volado for 45 days. The temperature is checked frequently through the day and any big change results on the stacks being broken down and rebuilt.

Once the leafs have undergone this process they are loaded into racks in a drying room. These racks allow any left over moisture to be removed and along with it a lot of the Ammonia. The smell in this narrow room is overpowering and many on our group had to leave. Once the tobacco has been dried the hands are loaded in bales for ageing and then rolling.

Nicotine is a great pesticide in high amounts and the stem has more than the leafs, this is why strong rolling/pipe tobaccos and snuffs contain sliced stems. All the stems are stacked up and used as a pesticide by being scattered across the group. 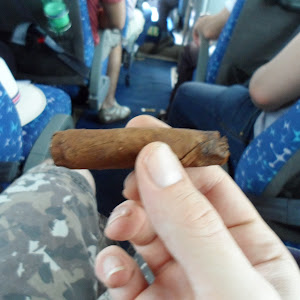 While we toured the Escogida and Despalillo houses, i smoke happily on the Cuban Rustic cigar. These unfermented cigars are a little rough, they have a very high amount of nicotine and give a sharp acid burn on the back of throat. Much like high amounts of Burleys (Perique, Kentucky too)do in pipe tobaccos. Although the flavours are no way near as refined as that found in a Habano, they have a great taste. Deep roasted, earthy, leathery notes and some wonderful notes of pepper. Due to the rustic nature, they burn badly and a little harsh though. If you are ever in a place that grows & cures tobacco, ask for a “Fresh” cigar. I still have one left and i will review it at one point, give it a year to settle down and age a little.

After another drive through more of rural Pinar del Rio, we came to a farm, not really knowing what to expect we were led to a patioed area and introduced to Hector Luis Prieto Diaz, one of Cubas finest tobacco farmers. Where as most farmers grow thier tobacco in open fields, Hector uses small gullies, small copses of trees to create varying shade throughout the day. Small streams of water run through his plantations to provide different soil conditions and various other methods to produce a wide ranges of flavours with his crops. As well as the growing conditions, hector uses computer controlled curing barns to regulate the light, heat and moisture levels to result in the perfect tobacco. In 2007 he won the “Hombre Award” at the Habanos festival for his skills in farming. Alejandro Robaina is classed as one of Cubas most celebrated farmer, but Hector is probably now considered Cuba’s best farmer. While at Hectors farm, we all got the chance to not only try one of Hectors personal blends, we also got to see them rolled. Now this cigar was something else, the draw was creamy and packed full of leathery earthy flavours.

A scary drive into the mountains later and we arrived at Vinales 24 miles north of Pinar Del Rio. Considered one of the most beautiful spots in Cuba. We had lunch in the straw roofed restaurant and headed back to the hotel.

After a few drinks and a quick shower, we headed off to Club Havana for a show and more drinks/cigars. A colourful cabaret show, Havana style.